About 7 years, I slipped on a gravel path at the start of a nature reserve near home. 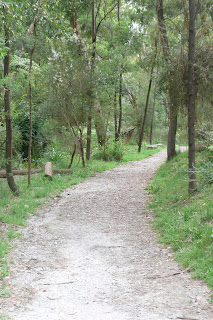 I tore my knee right open to the bone which needed 60 stitches.
I then developed DVT.
As a result, I have only attempted the path once recently with my husband and
never walked down this path alone again until yesterday. 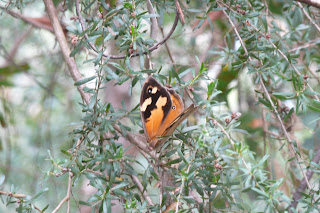 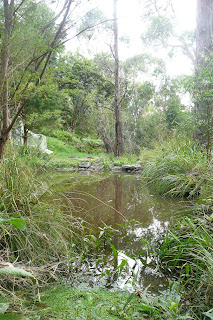 I am proud to say that I have conquered this fear, and these photos show what I was missing out on.
They are not brilliant by any means, but acknowledge a significant milestone for me.


Do you have fears you want to conquer?
Have you managed to conquer a fear?
Posted by Al Chris at 11:58 am 1 comment:

Where have I been??

Nowhere exciting, unfortunately... just losing track of time and getting snowed under with work...not much sewing done, but I HAVE made a few cards. I can usually grab a few minutes to create something... 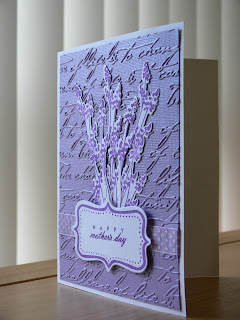 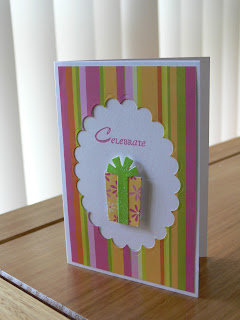 Patchwork has ground to a dead stop for several months - I am recovering from shoulder surgery, so have been very limited in what I can do.. frustrating, but each day is better :-)

I have made a few little things, but couldn't show you previously because they were a surprise for a special friend I have had the privelege of getting to know... Hi Lorraine, if you wander by here! I made her this bag to house all her goodies... 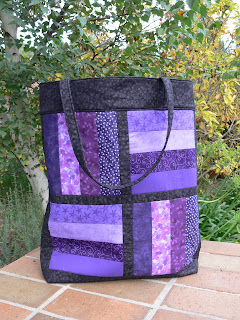 Email ThisBlogThis!Share to TwitterShare to FacebookShare to Pinterest
Labels: cards, items for others

Progress and a new club

I have a few of my favourite "Peace Quilt" blocks to show you..... 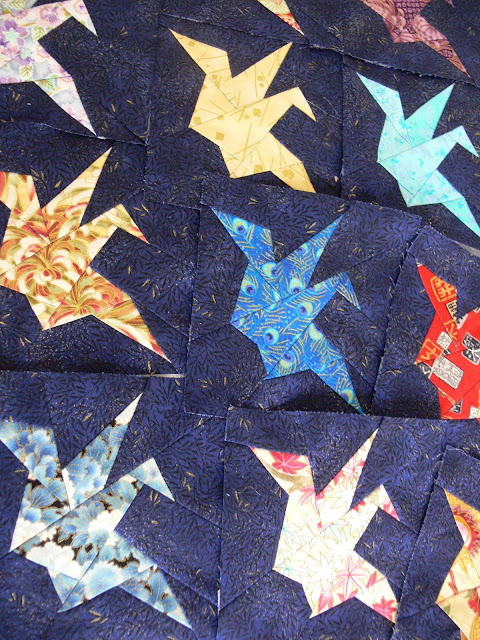 Tomorrow I plan to sew the first few rows together... as it is constructed on point, it will give me an idea as to what fabrics I need to complete more of. I'll post more progress next weekend.
I had to confess, also.... I was tempted by Sarah's new "It's Charming - Charm Square club".
There are four projects to look forward to, which are sent approximately every 6 weeks.....
this arrived yesterday: 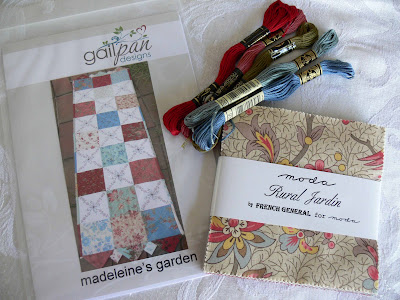 A mixture of embroidery and machine sewing... it looks wonderful!
ALSO....
If you get a chance, can you give your opinion on the pillow dillema I have with our new bed quilt please?
The link is here   Thanks!
Posted by Al Chris at 9:58 pm 2 comments:

Steven was asked by a shop to design and create some scarf pins samples for people to use for closing or fixing their knitted scarves and jackets. These are the first ones he has come up with.... 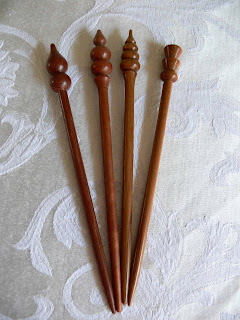 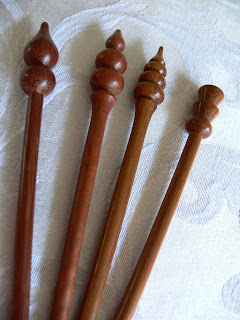 All are in different Australian native woods... one uses ironbark rescued from a very old bridge over the Murray River. They are approximately 15cm (6 inches) long and I've discovered also work well in the hair  keeping a bun in place.
They are much classier that the very plain sample he was given as a guide (not that I'm biased, of course!)
What do you think of them? Any feedback would be great.
Posted by Al Chris at 4:31 pm 7 comments:

The second Friday in a row... 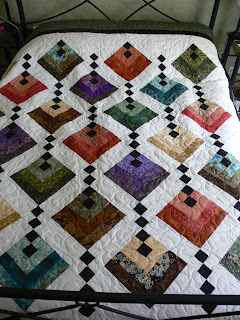 I usually have a couple of pillows on the bed as well, but have taken them off as they detracted from the quilt. I've tossed up making a couple of 'matching' pillows, but am unsure which way to go...
1. Use just the border fabric? (Nara Gardens sage chopsticks) or
2. Do a couple  more blocks that could then be bordered with the sage green ?
3. Put a little trim of one of the fabrics on some plain cream pillowcases?
4. Leave it as it is?
5. Another bright idea I haven't considered?
Any feedback would be a terrific help. 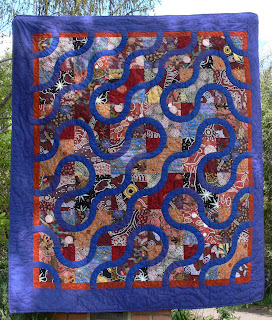 Finally, a year later than planned, Steven can have his own quilt...... the end product is a little different to the original, but the design is suited to a range of variations (for example, I've seen it in Japanese fabrics, some quilts utilising a feature fabric, so the 'patways' are only on part of the quilt.)

We wanted the blue 'rivers' to merge in to the outer border, so I needleturned sections of blue over the deep rust inner border. it is a great quilt to undertake, and by using the Curve Master foot, the blocks go together quite quickly. The hadquilting was done with perle cotton... only the second one I've handquilted, but something I needed to do as I wanted the whole quilt to be my own effort. The best bit.... my lovely man likes it!
Posted by Al Chris at 4:00 pm 11 comments:

Email ThisBlogThis!Share to TwitterShare to FacebookShare to Pinterest
Labels: quilts

to mave made such a special friend as Karen. She was my Sticher's Angel a couple of years ago and has become a very important part of my life... I feel lost if I haven't traded comments or shared stitching progress with her via email.

Our birthdays are within a few days of each other in December, and we both enjoy teasing each other along the lines of "I know something you don't know!" Karen has fired the first shot this year, but I will make up for it very quickly :-) 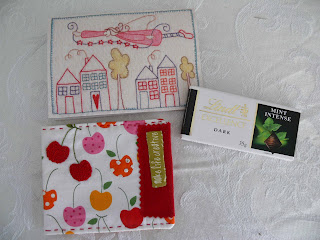 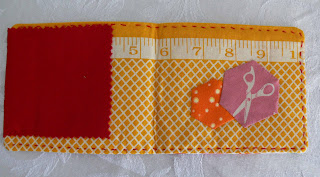 The photos don't do my little sewing book justice - Karen has embroidered the cherries with french knots and stitched some other parts, and she knows we ALL love Lindt chocolate! There is a little saying on the front of the needle book "Make life creative" -
Karen always manages to do that in so many wonderful ways :-)
I hope you all have a special person like Karen in your life.
Posted by Al Chris at 1:55 pm 2 comments: 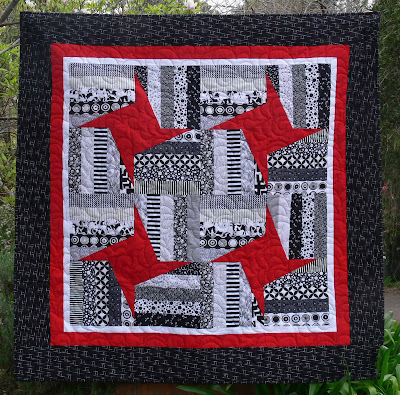 This is a fabulous little pattern I bought from Kate at  http://www.sewarmadillo.com.au/
It is a Cozy Quilts pattern and so quick but effective!
The reason for me needing to make it was sad... one of our ex students is dying from cancer, and our school community have rallied to help the family out due to massive bills they have been trying to deal with. This quilt was my contribution, and I am pleased to say it fetched a great amount in the silent auction amongst staff.
It has also gone to a great home.
The backing is shown below.... I wanted to make it reversible, or at least not totally boring on the back. Chris at Edge to Edge quilting donated the backing and quilted it for me very quickly and for a very reasonable price... she and Sandra always do a lovely job. 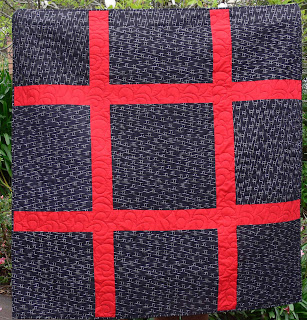 I should have posted these photos ages ago... this is the completed 'Hanging Garden' quilt I showed you a while ago, another Cozy Quilts pattern from Kate. It looked so great in our newly painted bedroom (originally two tone pink!) that I have now made a bigger size out of oriental fabrics for us which I'll show you when it is finished.. 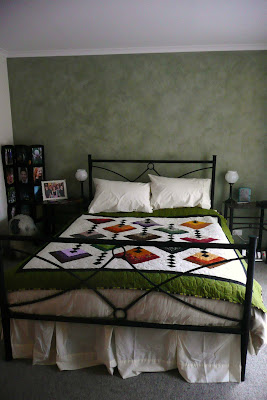 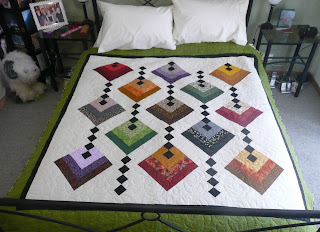 I'm hoping to bind it over the weekend (as well as finally complete Steven's "Murrumbigee dreaming" quilt which I finished hand quilting at 1am :-) )
Did you notice the Old English Sheepdog in the photo? His name is Gruff, and Steven gave him to me on my birthday way back in 1981.... he is a very special friend. Do you have a special friend like him that you treasure?
Posted by Al Chris at 10:23 am 6 comments:

Email ThisBlogThis!Share to TwitterShare to FacebookShare to Pinterest
Labels: quilts

since I blogged - sorry, life became much too hectic, and I downed tools for a while. I'll post some projects shortly, but I wanted to show you some images from the night away Steven and I just had... 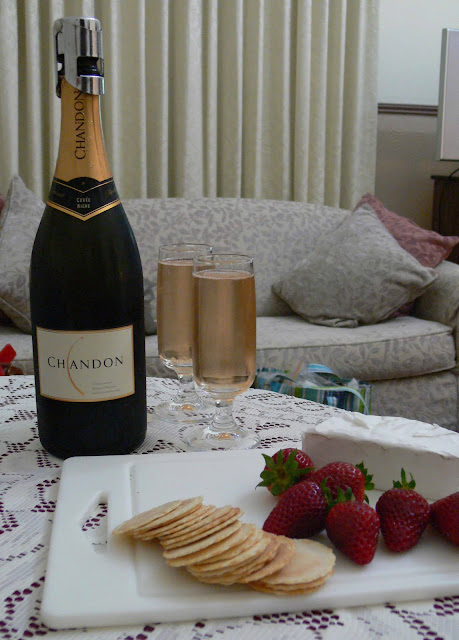 We arrived at our B&B on Saturday afternoon, went for a couple of walks and had tea at the local RSL.
We then snuggled up in our lovely room with the above essentials....bliss!
The next morning, after a fabulous breakfast, we strolled down and looked around...... 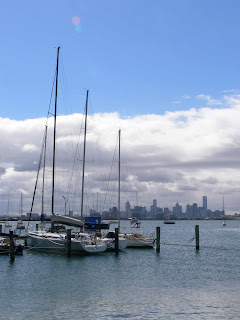 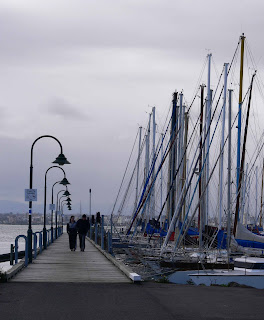 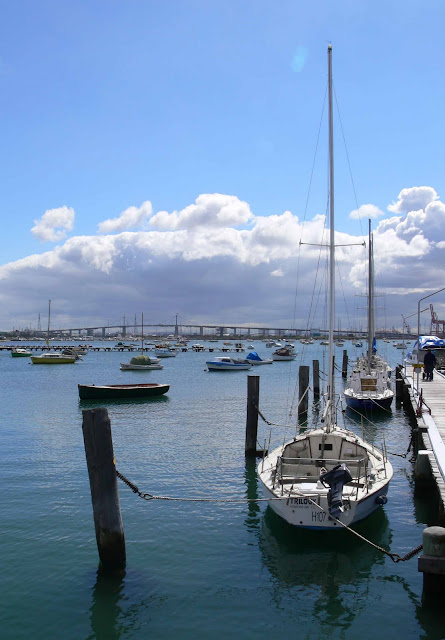 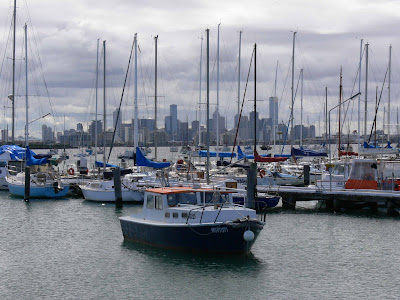 before I tell you where we stayed, I'm going to offer a surprise to the first person who guesses the location.. good luck!
Posted by Al Chris at 7:19 pm 9 comments:

I just found out that Penny (who sent Liam one of her beautiful quilts!) was a winner in Quilting Gallery's weekly quilt contest. head over to her blog and have a look at some of her creations, and also look at her family's website at Harmony Hopes - they are working hard to make the world a better place....
Posted by Al Chris at 10:24 am No comments:

After a break of a few months, I am finally getting around to publically raving about the last place
we stayed on our fabulous Tassie holiday .......
The Old Cable Station in Stanley.
I decided this place was so beautiful for so many reasons that it deserved an entry all by itself.
This little gem is tucked away just outside of Stanley proper, a short distance from the Highfield homestead and is the site of the cable station that enabled a telecommunications link
between Tasmania and the mainland.
We were lucky enough to be placed in the self contained cottage containing the old telephone exchange.... 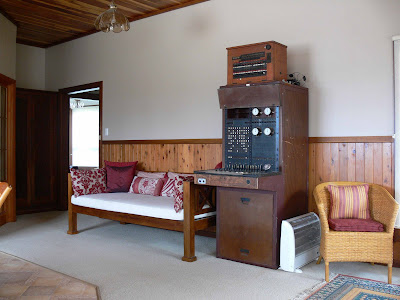 Out the window of the photo below, there is a covered courtyard the holds a beautiful timber table,
large enough to seat 10-12 people. A gas heater and barbeques are also provided, so even on a cool day,
it would be possible to sit and sew or relax in comfort.
Upon arrival, we were provided with tantalising foods of the highest quality for breakfast the next morning. 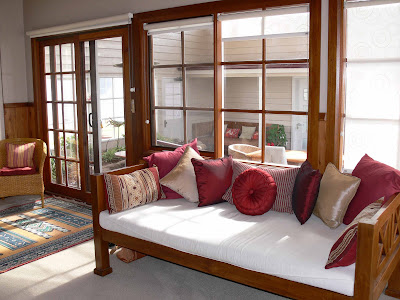 Several smaller but really lovely rooms are located on the other side of the courtyard. I could imagine staying here with a few friends for a weekend (or even longer!) relaxing in the fresh air
and sewing to our hearts' content.
The cottage has several bedrooms, and at least 2 have their own ensuite, as well as
a self contained kitchen and lounge with a TV and DVD player.
We were given the main bedroom which had its own massive bathroom
complete with a luxurious spa.... it was heavenly... 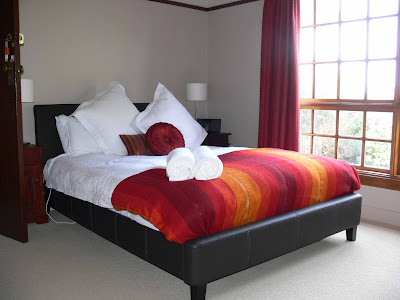 The icing on the cake was dinner in the restaurant in the evening. Mic is a top class chef who created a memorable meal for the two of us. I had been hanging out for the
wood oven roasted Stanley 1/2 crayfish with baby potatoes and a fresh side salad...... 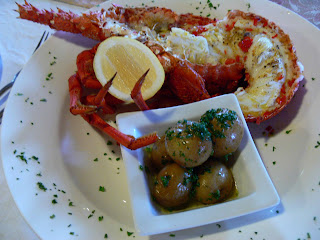 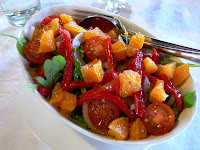 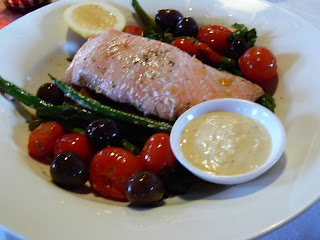 We finished off with a platter of Tasmainain cheeses and loccal produce.....MMMMMMMM!
You couldn't ask for better hosts than Mic and Charlotte - they are genuine people who are passionate about providing their guests with the best of everything. Would anyone be interested in going down there with me for a sewing retreat?
Posted by Al Chris at 11:31 pm 2 comments:

Al Chris
I invite you to share my wanderings around this ancient land and abroad. I also share my textile adventures, baking experiments and ponderings here.